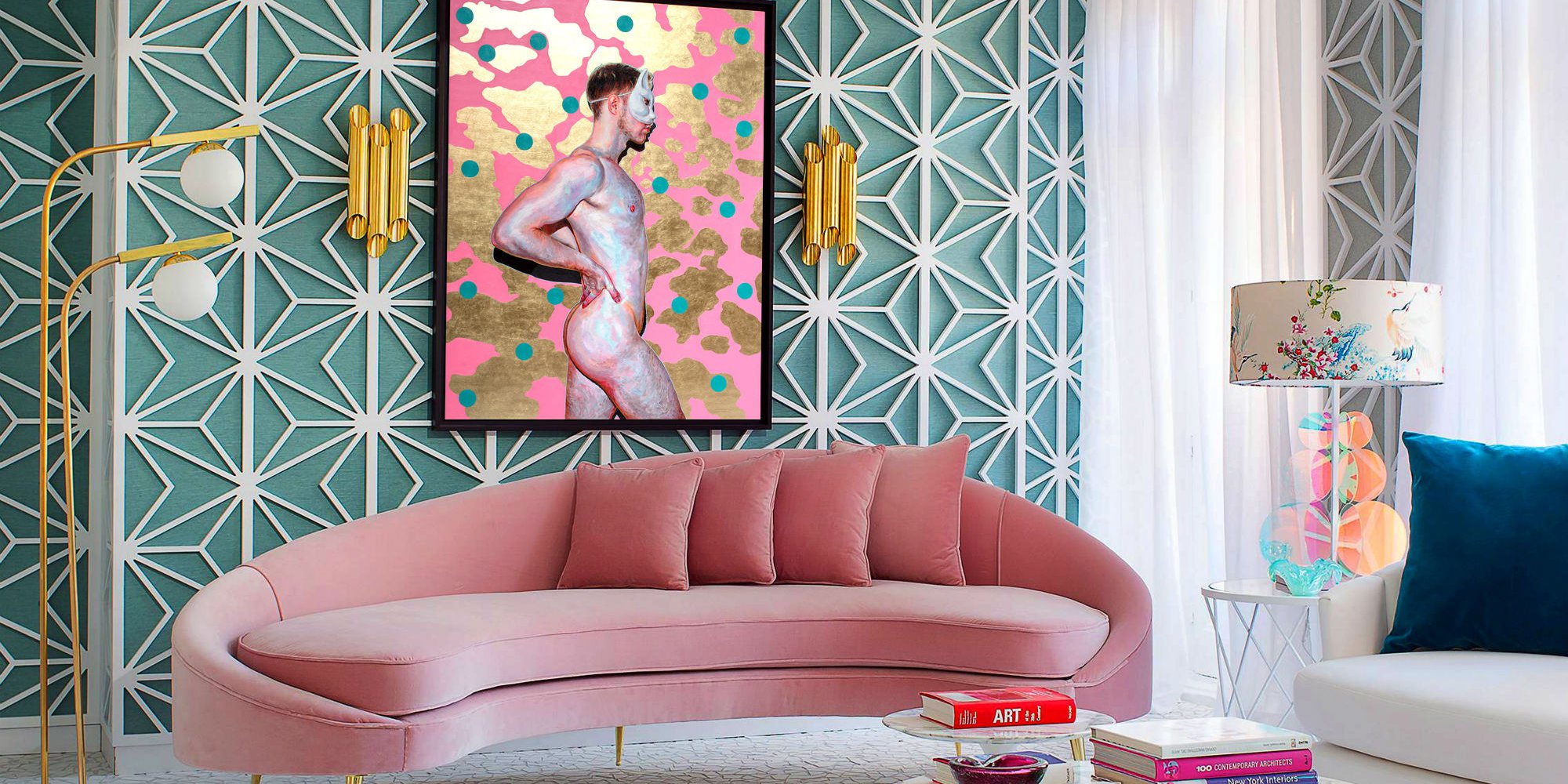 When it comes to identity, art has always been a medium used to express individuality through gender, sexual orientation, nationality, ethnicity, religion and more.

Because of its expressive nature, art has become integral to many social and political movements in history, especially the queer liberation movement. And in the year of the 50th anniversary of a turning point in the movement - the Stonewall Riots in New York City - we’re shining a spotlight on art’s role in the LGBT community.

But first, let’s take a look at LGBT-friendly art in ancient times.

Queer relationships portrayed in art is not something new. You can go as far back as Ancient Egypt and find instances of tomb art that clearly shows intimacy.

Egyptology.com found one fresco from a tomb dated around 2400 B.C. jointly used for two royal groomers named Niankhkhnum and Khnumhotep. In the fresco, the nose-to-nose “kiss” pose was only given to straight, married couples for Egyptian art at this time. Khnumhotep is even occupying roles of a wife figure in certain frescoes in the tomb, indicating a distinct relationship between the two of them.

The Ancient Greeks, though, are one of the most well-known and developed examples of queer art. According to Revel & Riot, the Greeks considered free adult male attraction to be normal and natural, so relationships between men were sometimes rites of passage. These homoerotic relationships were the subject of elaborate Greek poetry and art, especially the iconic black figure vases. Some of these distinctive vases show an older man giving gifts to a boy, while others show more overtly sexual acts.

As time went on, homosexuality became criminalised in several societies, including the UK, and mainstream artists began to be more overt with their messages in art. The Tate Britain in London showcased its first exhibition dedicated to queer British art in 2017 as a way to mark the 50th anniversary of the partial decriminalisation of male homosexuality in England in 1967. Before that momentous occasion, The Tate’s exhibition recounts the wide range of artistic expression, from overt symbols of peacock feathers in Edmund Dulac's 1920 "Charles Ricketts and Charles Shannon as Medieval Saints" to mainstream imagery with a queer twist, like Andy Warhol’s iconic pop art.

With the anniversary of Stonewall coming up, more art museums are looking back at the history of queer art and its role in the artworld. The Stonewall National Museum in Florida, US, hosted a “Queer Contemporary Art and Community 50 Years After Stonewall” event in January and continues to celebrate the anniversary all year long. The Brooklyn Museum in New York City also opens up “Nobody Promised You Tomorrow: Art 50 Years After Stonewall” in May of this year, which will feature 22 LGBT artists born after 1969 whose works “grapple with the unique conditions of our political time, and question how moments become monuments.” If you’re in the city in the summer, stop by the Museum of New York City’s exhibit full of historical photographs of the riot itself.

A shift towards visibility and fighting back

Since Stonewall, there’s been more of a shift towards visibility in the public eye, and it shows in queer art. To truly understand how this happened, one must examine the state of queer art before the riot itself and how art changed after.

According to ArtHistoryTeachingResources.org, scholars like Richard Meyer and Jonathan D. Katz have explored how mid-twentieth century artists, including Andy Warhol and Jasper Johns, developed visuals to signify queerness in conspicuous ways. The Stonewall Riots in 1969 marked a shift towards more visibility, however.

Stonewall is named after the West Village bar it occurred in. The riot was a result of when queer and trans patrons, who were regulars at the bar, fought back against a routine police raid. Many of the activists who were a part of the riot were trans women and people of colour, who then became icons of the liberation movement, including Silvia Rivera and Marsha P. Johnson.

Tara Burk, an art historian, wrote that unlike previous forms of activism, queer liberation promoted visibility by encouraging people to “come out” and proudly be themselves.

“This ethos was manifested in art as well as art history: artists became emboldened to make art about their sexual identity, and LGBTQ art historians began to recuperate the work of LGBTQ art that went unnoticed, had been censored, or written out of history books,” Burk said. “The desire to document and celebrate depictions of queer identity, life, and history is an example of the politicization of sexuality that emerged during this period.”

One of Burk’s major examples was Gran Fury’s photograph series about HIV/AIDS. One particular poster showed images of three interracial couples kissing, including a same-sex one, with the caption, “KISSING DOESN’T KILL: GREED AND INDIFFERENCE DO,” as a direct hit to the widespread rumor that the disease was solely based on sexual orientation.

Burk also said queer feminists took this idea of visibility and overt sexuality in art and ran with it in the ‘90s and beyond. But LGBT art continues to change and adapt based on society, politics and more, but primarily because of the artists expressing themselves.

While many famous artists have become LGBT icons to some, like Andy Warhol, Frida Kahlo, Keith Haring and Annie Leibovitz, the industry continues to adapt and change with new artists taking their work to the next level.

Several artists can be considered up-and-coming in the sphere of gay art, according to them. magazine, like Zanele Muholi, a South African artist working to document and make visible the lives of black lesbian women living in post-apartheid South Africa. But it’s also important to acknowledge veteran artists like David Hockney, who, as one of the greatest living artists, continues to influence contemporary art with career retrospectives of his art that openly explores gay love.

On Artfinder, we have several LGBT artists who upload art directly discussing their identity, or art that explores other aspects of their life. Nestor Toro, an Artfinder artist, makes top-selling abstract art that deals with other issues in life.

“I am gay and an artist but not a gay artist,” Toro said. “I don't make political art. I have nothing against those who do - I just don't because it doesn't interest me.”

Anton Maliar, however, said he has been creating explicit and homoerotic artworks for sale for years, selling to people in Germany, the UK, US, France, Canada, Australia and more.

“When creating this kind of artwork, I remember words by a German novelist Thomas Mann from his essay ‘Über die Ehe,’ that homoeroticism is aesthetic and heterosexuality is prosaic,” Maliar said. “Homoeroticism refers specifically to the desire itself and can be temporary, whereas "homosexuality" implies a permanent state of identity. So for me, there is a fine line between homosexuality and aesthetic depiction of the male body in an artwork.”

Overall, though, identity and expression of identity has always had a place in art, and LBGT art continues to grow in more ways than just overt expression.

How the US government shutdown has affected art

The effects reached museums, artists and even other countries.