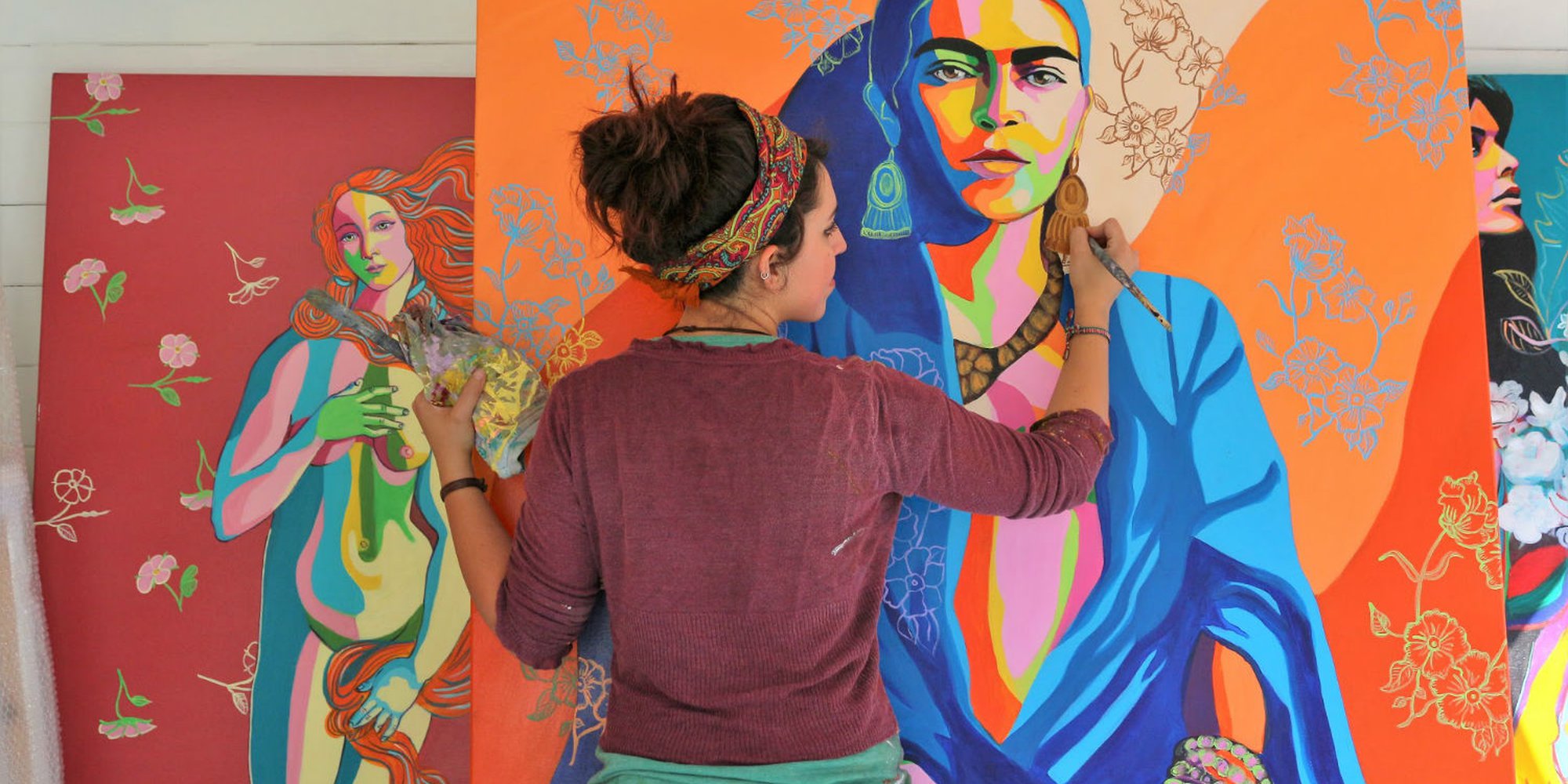 March: a lovely month full of thawing snow, budding flowers, chirping birds and butt-kicking women! It’s also the time of year to remember the history of women fighting for equal rights, and to look to the future of gender equality advocacy. As we wrap-up women’s history month, it’s important to take a look at some of the more prominent issues facing women artists in the world of art. But these strong artists shouldn’t be defined by these problems, or by their gender. They still manage to triumph and create magnificent work exhibited all over the world, and some even available on the Artfinder site.

Here at Artfinder, half of our independent artists are women and in 2017, we completed a gender equality report that found our women artists sold 40% more than the men, and earned £1.16 million for every £1 million men made. The high-end artworld is yet to catch up though, because the top 10 richest artists are still all men!

Women experience many issues in all aspects of art, including making room for it in their own personal lives, in their sales and in exhibitions or museums. We talked to a few Artfinder artists to find out what exactly they face each day in relation to statistics on gender equality in the world of art.

On Artfinder, our women artists experienced more sales than men in 2017, but that statistic is not a reality in the world of art. According to the National Museum of Women in the Arts in Washington, D.C., over 96% of artworks sold at auction are by male artists, meaning the market is still geared towards male success.

The Artnet Intelligence Report also listed only five women in their 2018 annual list of the 100 best selling artists at auction, with the most expensive work being sold by the extremely famed Georgia O’Keeffe, yet it’s price tag was still hundreds of millions of dollars lower than the most expensive work sold by a man (New York Times). Now, the sales at fancy auctions don’t necessarily represent sales by women artists everywhere, since auctions usually include the bestselling artists around, but women can make up half of the world’s artists so their representation at auctions is lacking.

Abstract artist Valerie Erichsen Thomson credits this disparity to discrimination in the art world, which, in this case, is gender-based.

“The issue is the work of females [is] devalued in comparison to that of males, artists or not, to the extent they are not acknowledged, credited or able to generate the same income,” Thomson said. “It's an infuriating state of affairs. Shouting louder and complaining is likely to fall on deaf/disinterested ears. But we can paint/carve/collage/photograph more beautifully.”

The lack of comparable sales may have many causes, like art world sexism, but it is not directly due to talent, like Thomson suggested. Many people can recall famous and successful women artists, like Frida Kahlo and Yayoi Kusama, but not many know that they were compensated at a much lower price tag than some of their male counterparts.

Most exhibited artists are males, and other museum issues

The institutions that work to preserve art history carry some of this sexism over into their world as well, as most exhibited artists at art museums tend to be male. Many famed artists throughout art history that anyone can name are male, such as Pablo Picasso and Vincent Van Gogh, though that is not to discount their talent.

In a 2019 study of 820,000 exhibitions, done by the Art Newspaper, only one third were by women artists. Furthermore, throughout the 20 most popular exhibitions in 2017, there was only one headlined by a woman artist: the queen of dots herself ― Yayoi Kusama. The United States is privy to this too, with 87% of art in the permanent collections of 18 prominent museums being by men artists, as recent as February of this year!

While many exhibits remain dominated by men artists, women artists still succeed in getting work exhibited, like Margaret Mallows, who submitted work to the Royal Academy Summer Exhibition.

Leadership at museums plays a role in getting women exhibited and treated equally, as well, like if a museum is curated mostly by men, then it’s likely that many artists will also be men. The National Museum of Women in the Arts cited that the top three museums in the world, the British Museum, the Louvre and The Metropolitan Museum of Art, have never had female directors as an example of this lack of female leadership.

But now that women artists are working towards gender equality, and seeing more results, museums documenting art history will begin to change with the market as well.

Work-life balance for any career can be challenging, but for some artists, the line can blur even more when art is inspired by personal emotions. If an artist’s studio is in their home, work time can be hard to define. On top of this, sometimes women artists have to balance family life and their career as an artist, if they choose to have children and be their primary caretaker. Of course, some women choose an entirely different path, but for those that don’t, their art careers can be put on hold.

Margaret Mallows, one of our top-selling printmakers, said that while she spent her late teens exhibiting and selling art in London, she eventually put it on hold to start a family. Now, she’s back to art after none for nearly forty years.

According to Artsy, though, many of the world’s highest-grossing women artists are mothers, including Julie Mehretu, Marlene Dumas, Cecily Brown and Chen Peiqiu, so motherhood may hold connotations in society for some, but it clearly doesn’t stop women from becoming revered artists.

Some people are working to fix it

Despite these examples of gender disparity in the art world, there are still several positive experiences held by women artists everywhere. And some museums, galleries and art marketplaces are working to change the inequality! Many famed museums, like the NMWA, held special exhibits in honor of Women’s History Month or even offered free admission for visitors. The European Museum of Modern Art is currently exhibiting a months-long exhibition all about international women painters.

As more and more museums begin honouring the month, there are more positive changes, according to NMWA, like nearly 70% of all Bachelors and Masters of Fine Arts candidates in the U.S. being women, and increasing female leadership at museums with budgets over $15 million.

Like watercolour artist Svetlana Vorobyeva said, women should never give up on the fight to be as successful an artist as they want to be.

“Never stop believing in yourself and remember that we don't owe an explanation or proof of your talents to anyone. Obvious things, like the fact that spring comes after winter, water is wet and women are just as capable of achieving big things as men are, do not need an explanation,” Vorobyeva said.

Few people can name five female artists — can you?

Few people can name five female artists — can you?

Artfinder in the press

This International Women’s Day, we have chosen to celebrate female representation in the arts and take a closer look at the history of the Feminist art movement.