Artists of the month: May 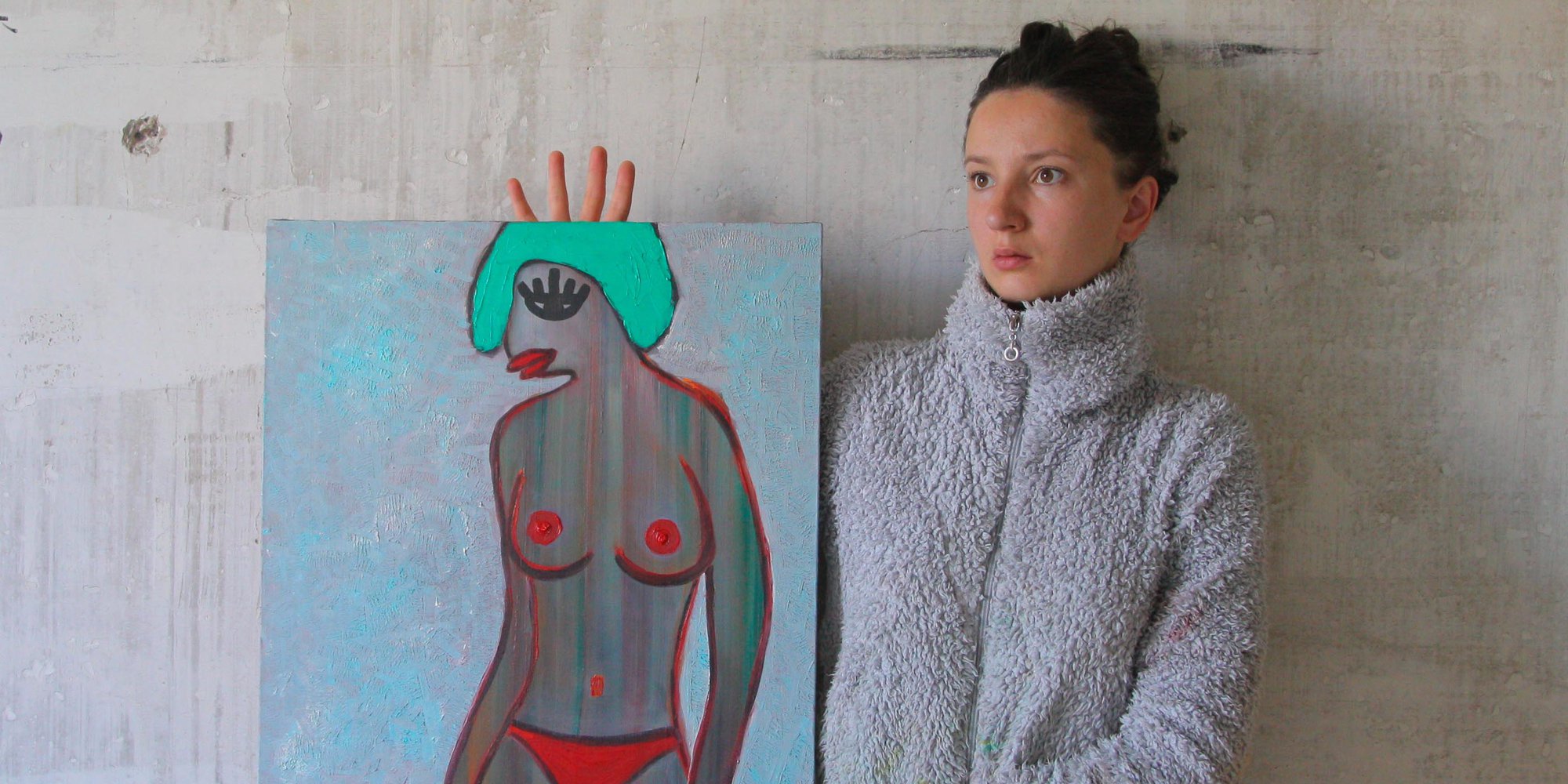 Hello again my little bunnies. This month I feel as if I’ve gone off-piste, thrown caution to the wind perhaps and travelled an autré road. And the artist that has tempted me into this is none other than the delectable Ann Zhuleva.

As I was looking through the newer works to be added on the Artfinder site I came across Ms Zhuleva’s work. Candid, playful, colourful, petite little pastel paintings waiting to be noticed. To be honest I wasn’t sure but found myself scrolling and clicking onto the next page and then the next and the next. Zhuleva has 73 pages of work!

So at page 10 I decided to click onto the last page as I sometimes do to see how the work has progressed/changed/developed etc. The movement of the work is linear, it has become simpler, more concentrated and has discarded the marks and surrounding atmosphere.

It is now, succinct, to the point and revelling in the moment that is being portrayed. I love them. They are neither laboured nor overthought. The more I looked at the works the more they made sense. Look at them and enjoy. I did.

Anyway, I’m off to pick dandelions for a project. I’m not even joking."

I'm really pleased to be able to introduce Emma Reynolds this month, a brilliant printmaker who joined Artfinder very recently. Emma creates beautiful screen prints of cityscapes, including London — where she lives and works — and New York as well as the natural world. Photography plays an important part in her work and she particularly loves capturing the day just as everything is waking up. Emma translates this 'golden hour' of the day through her printmaking, taking you with her as the sun rises with the use of hazy pastel and jewel-like colours in her work. I also love her exquisite detailing and strong compositions that bring a sense of calm to whatever she is capturing. Emma is definitely one to watch!

"These charming contemporary coastal scenes bring memories of time spent and yet to spend in wonderful locations. They are fun and the colours are just great."

"The underwater photography taken by 27mm, or Enric Gener, represents an entirely different world. In the simultaneously clear and shadowy depths of the ocean, he captures sinuous figures stretching and arcing their bodies in the water, completely unencumbered by the gravitational pull that harnesses them to the earth when on land.

The composition of Gener's photographs is neat and unassuming. The divers have organically taken their place in the central one-third of the print which allows the viewer to absorb the maximum amount of visual information almost immediately before he can look closer to appreciate the delicate intricacies of this underwater environment. Such a neat composition also enables a natural framework to develop around the central figures, encompassing them both figuratively and metaphorically.

Gener captures the sea's surface from underneath, turning the rippling and undulating water into a liquid ceiling that resembles a cloudy sky. It also represents a door to another world; from above the surface to below, outside to inside, this is a world to which you can escape and release the added pressures that accumulate on land. It's a world where none of our earthly problems has any currency, and where the human body achieves alluring weightlessness.

"I’ve only ever been to Cornwall once but if Hazel McNab’s gloriously atmospheric linocuts of Cornwall’s rugged coastlines are anything to go by then I need to return again VERY soon. McNab is an artist who celebrates the dramatic forces of nature using light, pattern and texture. Her work invites “the outside inside” and for the spectator to view “things differently.. to see things from different perspectives.. [and to drink in…].. that glorious power of nature.” And these are indisputably exhilarating, profoundly beautiful and expertly crafted prints that take full advantage of the innate qualities of the Lino medium which she also pushes in new and exciting directions. Take, for example, Storm Approaching and The Loe, two predominantly monochrome pictures of a thunder cloud bursting over the solent, and a group of silhouetted maritime trees on The Loe. While the sea, in the former, is created from the most incredibly detailed and meticulous ribbed cutting, the storm cloud is a solid monumental mass of black ink which McNab “sprayed with water to represent the rain spilling from the heavy cloud”, thus creating a limited edition of 1. On the other hand, in The Loe the beautifully regimented foreground trees and rippling, lapping water is juxtaposed with the crackling, beautifully free scribbled cutting of the sky. And in another fine print, Porthmoina Cove, the dramatic monotone rocks are delineated, almost architecturally (and evoke the visceral penmanship of John Minton and Michael Ayrton), while the back and foregrounds and full of detail, free cutting and a myriad of blues and olive hues. Light is also central to these prints, the rippling light across the sea, a cove, a loch or the dappled light and shadow from an avenue of trees, perfectly rendered in exact dots, dashes and splodges."

"Describing her creative process McNab uses her own photographs for inspiration and colour notes, while the linocut itself is cut using the reductionist technique: “which means I use one block of lino, cutting it away after I've printed each layer. By the time I've finished there's hardly anything left. This makes it a limited edition print as I can't print it again.” With this in mind, many of her more detailed linocuts have as many of ten, fifteen or more carefully impressed colours printed across the picture surface adding pattern, texture, depth and atmosphere. These are such a joyous breath of fresh air that I compel you to have a look and breathe in Hazel McNab’s briny, sun-filled Cornish coastal scenes. What, indeed, could be better than (in McNab’s own words about my favourite print, Coastal Cove, Pendeen) to “Look down the flower-covered banks into a small sandy beach. Then see the beautiful turquoise of the sea over the sand. Notice the seaweed-covered submerged rocks, then let your eyes move out to the horizon. It's a lovely day in Cornwall."

"I find Petr’s works completely engrossing. They explore themes of weight, rhythm, balance and colour through the careful placement and repetition of the simplest of geometric and textural elements. Produced in series, the works play off each other and would benefit from being placed together in groups of two or three."

"India has been on our minds a lot this month in the light of the tragedy that is unfolding there currently with covid, so we wanted to find an artwork that captured and celebrated the beauty and the vibrancy of this magical country. With this in mind, we have selected the photographs of Masis Usenmez. Photographer Masis won the Parisphoto Grand Prix in 2020 and exhibits widely in Europe and the US. He travels the world with his camera taking photographs in the streets, documenting real lives in colour and black and white. It was these two photographs that initially caught our eye. At ‘Agra Train Station’ he composes the shot perfectly, and the blues are punctuated by the vibrancy of the orange turban. This man at the window stares piercingly into the lens as the other figure sits in profile deep in thought. India’s rail network is one of the largest and busiest in the world and train travel is integral to the country’s economy. Travelling by train is a brilliant way to experience India in all its crowded glory. The second place to witness vibrancy of India is at the Ganges, India’s river of Life and death that draws pilgrims from all over the world. In this photograph ‘Ganges River’ a man in bright red shorts is central to the image as he washes his hair while others swim. Again the composition is wonderful and the red punctuates the image in the same way the orange turban does drawing the eye in. One of the things we noticed on visiting India was how alive it is with an array of colours, sights and sounds. The colours of India are ingrained in its way of life and each one holds an important cultural and symbolic meaning, it is one of the most colourful places on the planet. These photographs make us see what we might miss and Masis is brilliant at capturing everyday rituals so familiar to the country. He captures the essence of a place in his work. Mark Twain wrote, '[India is] the One land that all men desire to see, and having seen once, by even a glimpse, would not give that glimpse for all the shows of all the rest of the globe combined."

"My pick for artist of the month is US artist Ray Beldner. Ray’s mastery of the collage medium is exquisite, resulting in a unique array of artworks across two and three-dimensional mediums. Using images collected from art history books, auction catalogues, art magazines and posters, Ray creates compositions that are bright, lyrical and visually confounding.

Drawing these various visual elements together, Ray chooses various shapes, colours and textures that are visually appealing to him, which he then gathers together into compositions that play with their complementary and contrasting attributes.

Creating smaller works on paper to larger sculptural works, he is interested in the tension between figuration and abstraction and how 2D forms can occupy, define and create space. By repurposing images created by others, Ray creates works that are as nostalgic as they are contemporary, displaying arresting shapes and colours that grab and hold the attention of the viewer."

James Earley talks to us about his award-winning portraiture

We meet James, who sold his first painting online through Artfinder and is exhibiting at the Venice Biennale next year.