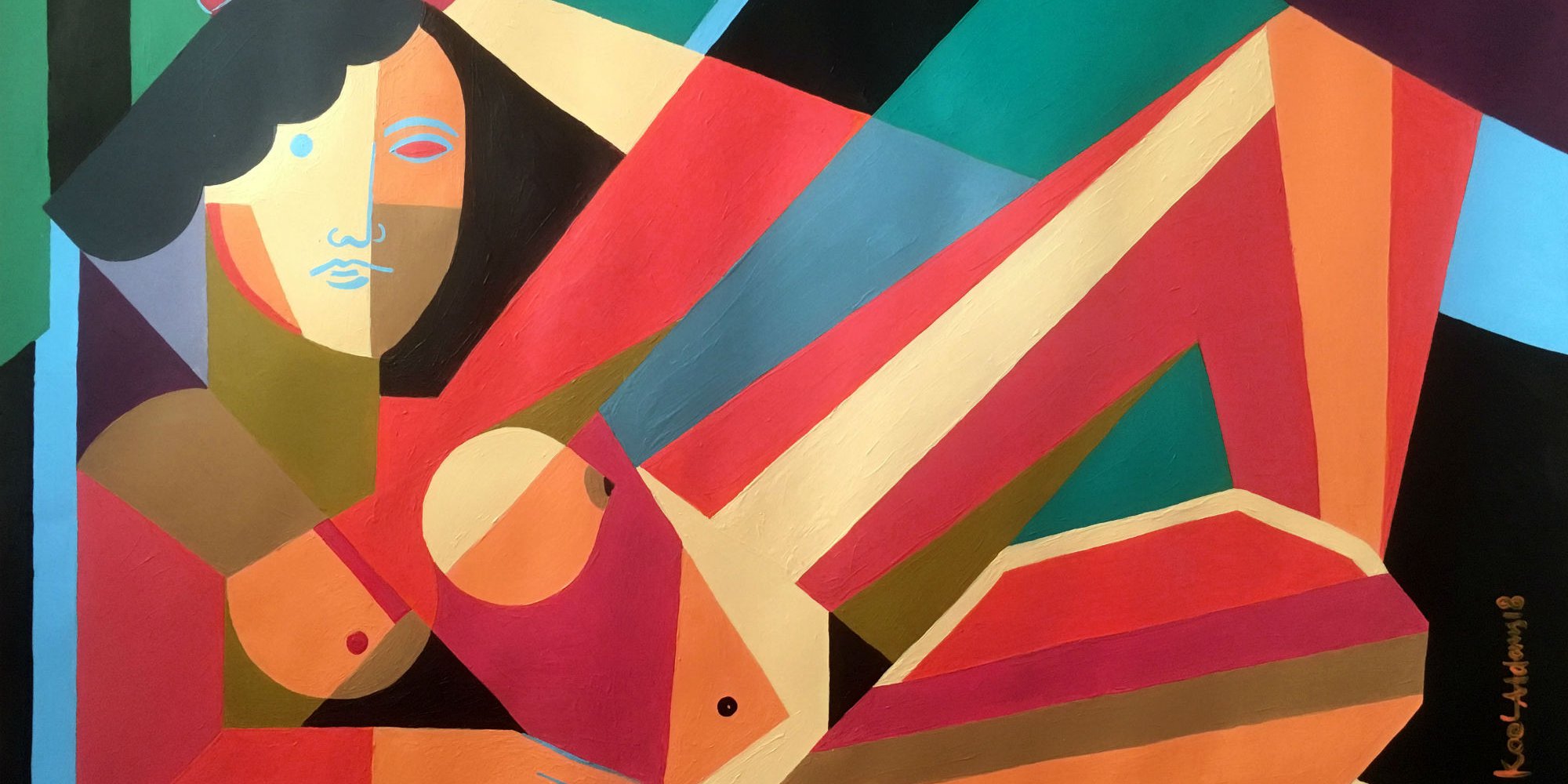 Most people hear Cubism and immediately think of Pablo Picasso. And while we love the father of Cubism, collage and constructed sculpture (all C’s), there’s much more to this avant-garde art movement from the 20th century. Full of cubes, mystery and abstractism, Cubism is always fun and new.

Here we break down just how Cubism came about and how it’s been modernized. Come and check out these cubes for yourself.

I like the sound of Cubism. Where did the name come from?

No matter that Cubism became one of abstract art’s most important movements, its name actually began with an insult. Art critic Louis Vauxcelles derided the new style as merely “little cubes”, believing the work vastly inferior to traditional paintings with more realistic perspectives.

It was another French art critic, Guillame Apollinaire, who came up with the exact term Cubism (or Cubisme, to use the French). But instead of outrage, he used Vauxcelles’s term positively, being an early champion of the style.

Okay, now where did the movement come from?

Good question! It was none other than that trailblazer of modern art, Pablo Picasso. Although himself inspired by the work of George Suerat, the idea of multiple perspectives based on flat, geometric shapes was a new idea.

His painting Les Demoiselles d’Avignon from 1907, depicting a group of variously-dressed women, is considered the first Cubist painting. Picasso was not the only innovator of this style though. He worked very closely with George Braque, and it’s widely understood that the two artists developed this new mode together.

The movement originated in France, as seen by Picasso’s artwork title, but soon expanded worldwide. Some of the original Cubists were not French, although they were residing and exhibiting in France at that time. And, of course, Picasso was Spanish.

So what did people think of Cubism when it debuted?

Well, a group of artists formed a club to discuss this new art style, called the Puteaux Group.

The group met in the Puteaux suburb of Paris to discuss all things art, and in particular Picasso’s groundbreaking style. The group comprised of artists Jean Metzinger, Marie Laurencin, Fernand Leger, Robert Delauney, Henri le Fauconnier and Albert Gleizes, but neither Picasso nor Braque.

While that may seem a bit harsh, let’s not forget Picasso was inspired by others too, and that many other people are inspired by and work within different movements. He was also friends with the artists in the group. Laurencin exhibited alongside him and they became firm friends.

They weren’t merely copy cats but were influential in their own way. The group’s joint exhibition at the Salon des Indépendants in Paris in October 1911 saw the first public exhibition of Cubism art. The set were friends with the critic Apollinaire, with the term first seen publicly here.

Their subsequent exhibition, a year later, saw further artists joining and a new group name: the Section d’Or, which translates to the golden section. It was a nod to the mathematics seen in geometric Cubism since the name refers to the golden ratio, found in mathematics and occurring in nature, and which is supposed to be especially pleasing to the eye.

It may also have been a way of establishing a distinction from what they believed to be a narrower definition of Cubism that Picasso and Braque practised.

What qualifies as Cubist?

The movement’s primary imagery is a reduction of forms to a few geometric shapes, showing multiple perspectives. Its flatness means neither the foreground or background are given greater importance.

Rather than abstraction, which moves away from realism, the idea is that it produces a kind of hyper-realism. We perceive the world in multiple and changing ways, at any given time, and paintings of these form aim to reflect that.

So, if I want some Cubism art on my walls I don’t need a multi-million pound bank balance?

Absolutely not! Artists still paint in this tradition, sticking to the general ethos of the movement and creating some beautiful pieces. Snag one for yourself to bring the class and spontaneity of Cubism into your home.

Night sky photography and the fascination with the stars

Bring the Milky Way into your home and marvel at the moon and stars every night right from your own bed.

Are you sitting comfortably?

Art and literature through the ages.