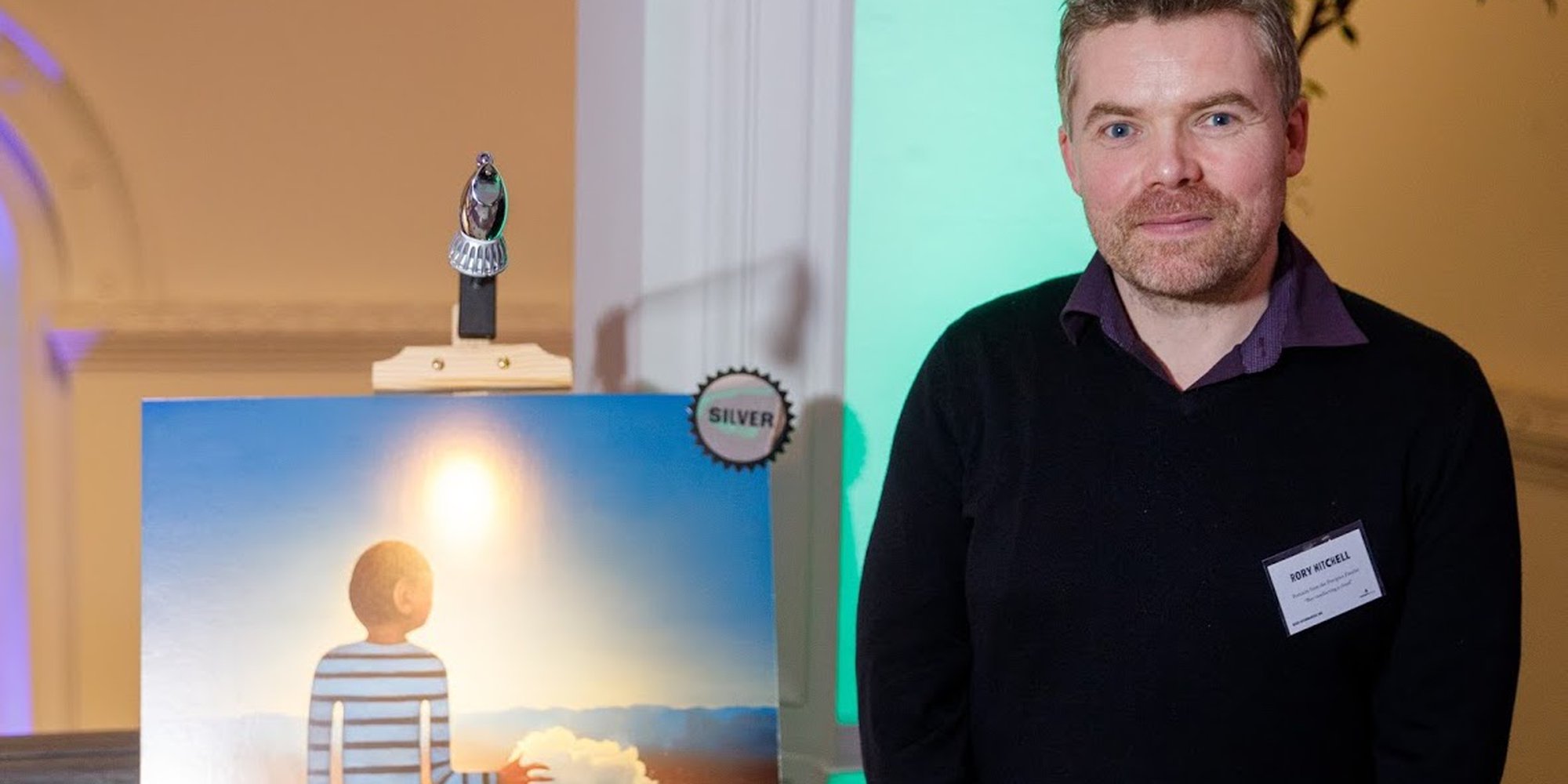 This is the second in our series of interviews with the winners from our Portraits from the Precipice competition, in partnership with Octopus Energy. Scottish artist, Rory Mitchell, who lives in Norway won second prize with his piece, 'Boy conducting a cloud.'

The Portraits from the Precipice competition called for artists to create works that raise awareness of climate change. In these very strange times we find ourselves in, we feel his surreal works provide some hope amongst their weirdness.

What first inspired you to create art?

As far as I can remember, I have always had art materials in my hands. As a teenager, it seemed like a natural progression to study at Art College. I ended up in Edinburgh College of Art.

What inspired your piece?

Early in 2019, I painted a miniature which was the original study to the painting that I submitted to the competition (this miniature can also be found on Artfinder). Issues surrounding global-warming had been, and still are, near the forefront of my mind. I had decided to do a larger version regardless, but fortuitously, the competition was announced and I already had a piece on the go that met the criteria accurately. It took a fair effort to complete it for the deadline though!

‘Boy conducting a cloud’ paints a bleak vision of the future. There are, however, strains of optimism; the surrealistic narrative depicts a boy attempting to rehydrate barren lands. Despite humanity's tendency to lay waste to its surroundings, some individuals have the tenacity to contribute, create and solve. Nature will be heavily reliant on such people in the years to come.

The boy appears to be painted in a naive, if not expressionistic manner. These styles contribute to the notion of a youthful uncertainty and clumsiness; of someone acting out of necessity. The apparent playful vision of anatomy making up the figure is contrasted by a more focussed draughtsmanship. The foot placed in the ground, for instance, shows a relatively accurate rendering of the transfer of body weight. This realism adds a gravity to the piece. In all likelihood, the reality of Earth’s fate will not give us grounds for cheer.

A great deal of thought went into the skyscape in the background. From an original plan of bushy, vibrant clouds depicted in the original miniature version, to wispy strands of desert clouds, to the final conclusion of an empty sky. It is this empty space that is the most descriptive in both a compositional sense and in its ability to influence the narrative.

What does art mean to you?

There is no way around it; I am obsessed by art. It has always been a prominent fixture in my adulthood.I find art to be both a beautiful and poetic way to communicate. I can say much more in a painting and be better understood than I can with the spoken word. That might be because of my Scottish accent though mind you.

How and when did you first become an artist?

As a teenager I began creating a large portfolio for art college. I almost neglected other subjects at school. Thankfully, I was accepted into Edinburgh (in 1995) and I haven’t looked back since. It is hard to accurately explain how I first became an artist (objectively at least). Like many other artists, my brain is wired for creating stuff. It might sound daft, but it feels almost inevitable that I became an artist. I just let the current carry me along.

Do you have any other employment, and how does art feed into this?

Happily, being an artist is my full-time work. I do, however, help run a gallery in central Oslo (It is called H12 Galleriverkstedet) with five other artists. The work is unpaid, but it allows me to showcase a lot of my work on a permanent basis, whilst engaging myself a bit in the Oslo art-scene.

How can art help raise awareness of the climate crisis?

Art is an exceptional way to communicate a message. It can describe the complexities of the climate crisis, convey visions of the future, and also stimulate an emotional and critical response to the issue. It does so in a way that is often immediate to a viewer. I would also say that the visual arts may become increasingly prominent again. The internet is built around using imagery to engage people. It might be fanciful, but art could prove invaluable in raising awareness of what is currently happening.

What do you say to those who think the art world is only for the rich?

Not at all! On any given day, most people will likely see dozens, if not hundreds, of examples of the visual arts. Be it television, the internet or advertisements, the human world is dripping in art. And most of that is free.

Also, as far as I am aware, most exhibitions are still free in the UK, or at worst cost the same as a cinema ticket (certainly cheaper than football match ticket!). All it takes is for folk to lift their bottom off their chair.

What are some of your favourite materials to work with and why?

I mostly work with oil paints. After 25 years of using them, I am so familiar with their nature that I don’t have to think too much about technicalities when I’m painting. This helps make the creative process more immersive.

Inspired by the increasing issue of plastic pollution in the ocean, David Gill's ‘Lost bottle, lost planet, lost people’ piece came in third place at our 'Portraits from the Precipice' competition.