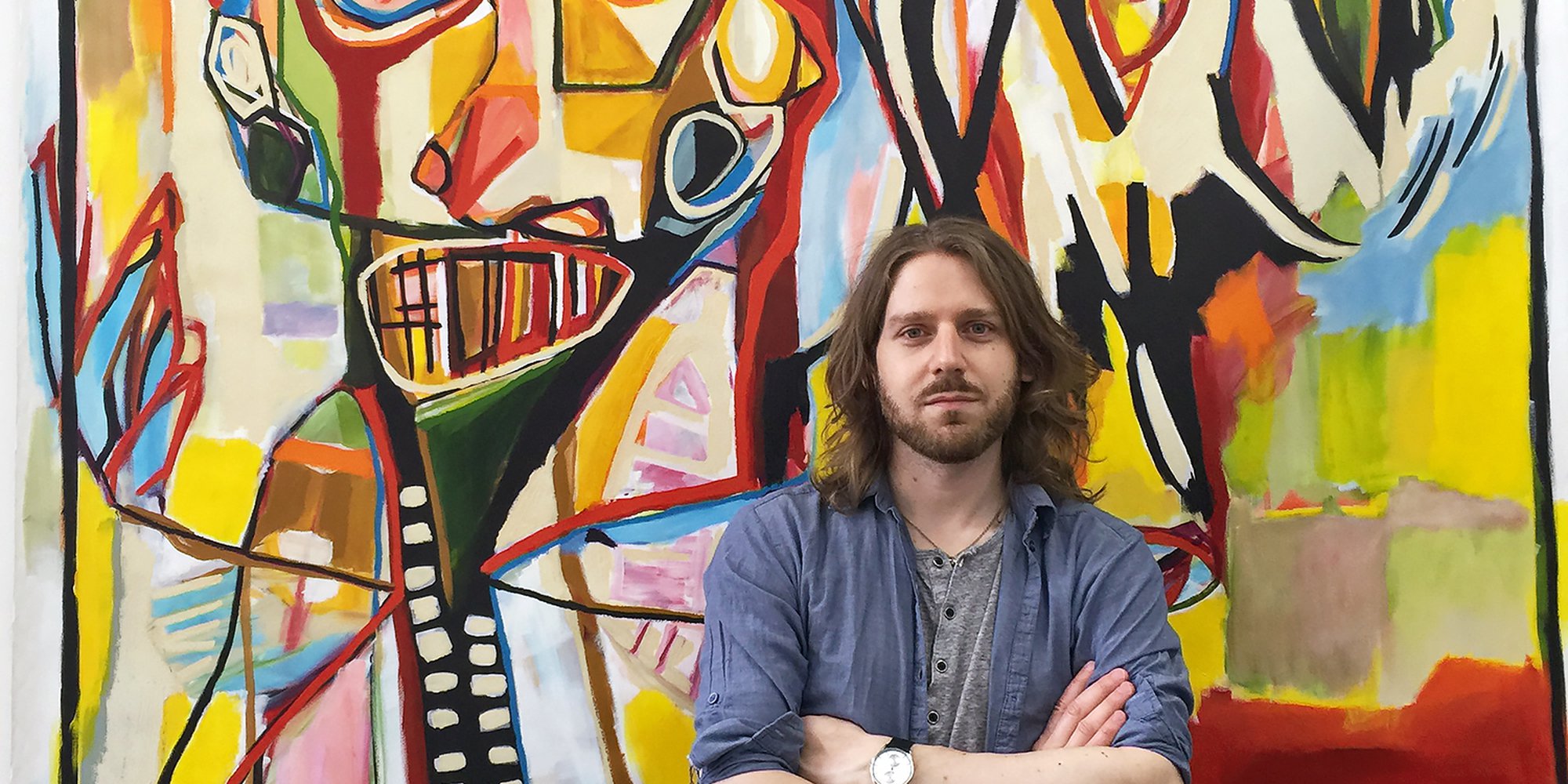 Based in New York City, Reinder Oldenburger's playful paintings of disproportionate, exaggerated human forms made up by bold arrangements of color have always caught our eye.

On becoming an artist

"My painting career started abruptly in 2011 while living in The Netherlands. I studied music at the Conservatorium van Amsterdam, so music had been a big part of my life up until then but I’ve always especially had in interest in painting.

When I was 27 I visited the Van Gogh Museum in Amsterdam, and learned that Van Gogh began to paint at the same age. I felt a strong connection to his story and even though I already had an interest in art and specifically painting - I had already thought I would paint one day - at that moment for the first time I could really see myself starting to paint. This is the moment when all the pieces of the puzzle came together.

I remember saying to my girlfriend, "You know I’m a musician, but actually I’m a painter too." The week after, I went out to buy a set of acrylic paints and have painted every day since."

On being an artist

"Painting is creating, adapting and reacting to constant change. I see making art as creating change as I make something that didn’t exist before. Making art for me triggers personal growth and is a very effective way to translate ideas and messages. This is why my work continuously changes when my music changes and vice versa.

This hunger for change can also turn into restlessness, which is a characteristic that I recognize in myself and many other artists. I believe that this is necessary for an artist to succeed."

"Being an artist is hard work. It means being grounded and awake, to be in control and to be able to multi-task. It is a way of life; signing off is not an option."

"I begin a painting by spontaneously and expressively drawing or painting on the canvas, mostly without a pre-existing idea or memory. As I sketch, bodies of color define themselves and gradually become a composition, which establishes a focused form.

My work is a melting pot of intuition, labor and chance. I tend to work on all parts of the canvas at the same time, and in doing so, movement and a sense of depth develop in the balance between bold lines and the bones of the original sketch. My painting process is evident in each piece I create; this is a crucial part of my practice."

"Space is hard to come by in New York City and having started out by painting in my apartment, I feel very fortunate and privileged to now have a dedicated paint studio to work in. I moved into a new space located in the up and coming neighbourhood of Long Island City two months ago, and a space dedicated to art-making only makes it simpler for me to be focused and productive.

The building is very accessible, located right over the bridge to Manhattan and 10 minutes from my apartment. When I walk through the studio door I instantly get a rush of energy that drives me to paint every day.

Being an artist means being alone most of the time and for me, this is where I find myself most productive. In the studio I prefer to work while listening to music, because music really resonates with me and the interaction of that and painting triggers my creativity."

"I’m inspired by a combination of things around me in NYC and by my memories of the experiences I have been through in my life thus far."

"As a painter, I am constantly challenged by the work. I strive to strike a balance between colour, shape and texture within the work, which can only be achieved by following my instincts. I think of my paintings as musical compositions, made up of layers, dynamics and harmony. A painting is finished when there is nothing left for me to add.

The biggest challenge I am facing outside painting itself is time management and staying focused in this fast-paced digital world, whilst living in one of the busiest cities on the planet. I find that mainly due to technical advancement, distraction has never been more unavoidable and we are all losing our ability to concentrate."

"Being a native Dutchman I feel a strong connection with the Netherlands and Dutch artists; their style is distinct in the way that it is very direct.

Artists such as Frans Hals, Van Gogh and Karel Appel have a direct quality to their work, which for me is linked to the Dutch culture and sets it apart from other nations.

I’m also drawn to the work of the avant-garde CoBrA movement, New York Pop Art, graffiti artists of the 80’s and Abstract Expressionists such as Willem de Kooning and Jackson Pollock whom I admire for their unique, innovative and expressive painting styles."

"Generally, I admire individuals who channel creative energy whether they’re an artist, musician, architect or anything else. Above all, I admire people who are sincere and chose to create instead of destroy."

"I have always appreciated nature and choose to live a fairly simple lifestyle, as I believe the best things in life are free.

I was born and raised in Fryslân, the most northern province in The Netherlands, in a very small town with only 1500 inhabitants. I was raised bilingual and grew up speaking Frisian (my mother tongue) and Dutch. In 2011 I moved to New York, which as you can imagine was a huge change in environment and pace. At times it has been challenging to adapt, but I believe it has helped me grow as a person and as an artist as it has continuously forced me to push my limits."

"For me Artfinder has acted like a wide-open doorway to the entire world, through the way in which it connects thousands of art lovers and artists in countries all over the world. Since I joined Artfinder in 2014 it has consistently been one of my go-to online platforms to showcase my work. Artfinder has enabled me to make valuable connections that otherwise I feel I would not have made.

With regards to technicality, I think Artfinder offers everything you could wish for: a 14-day return-period, a direct messaging system and the option to write users reviews. For artists, the option of being able to create sales promotions, to publish and un-publish work and to switch on a vacation mode are extremely handy.

I have found that there is a real sense of community; I recently met up with Angela the Business Development Manager of Artfinder along with several NY-based artists to talk about art and life here in NYC. Such meetings are a great way to build a collective to give one another feedback and support."

"In the future I would like to keep working on a larger scale and create more elaborate compositions. I am deeply interested in developing my drawing skills as well as exploring other mediums for example, I can imagine myself experimenting with sculpture."

"However, I believe that the moment decides what the future will bring and that there is no big master plan. As with anything, I believe most progression lies within the action itself."

Reinder Oldenburger's expressive, playful paintings have always caught our eye... So we thought we'd have a quick catch up and learn more about the man behind the paintings.

This week Artfinder met London and NY based artist Ana Laurini who talked about painting in both the studio and on the streets, inspiration and her upcoming exhibition in NY's East Village!